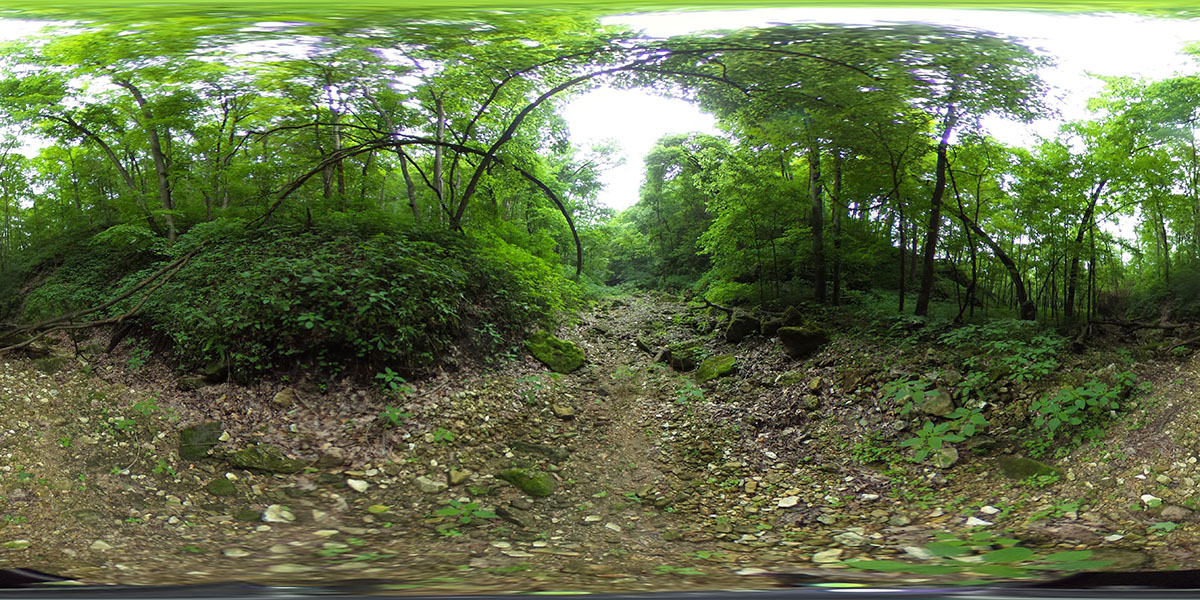 Summer simmers on, galloping toward autumn. I’ve got my new camera, an Insta360 Pro, and it’s amazing. Before I can show that work, however, I have to get some of the last Ricoh Theta S shots that I did curated.

As I mentioned, many moons ago, I found a way to make stereoscopic VR with existing Equirectangular images, shot from relatively close positions near a central point. I’ve not worked with anyone else’s images yet, but I should be able to do the same trick with any latlongs that are shot around or near a nodal point, so long as they aren’t spaced too far apart.

Any nerds out there with their own latlongs that want to see them stereoscopic? Send ‘em over and I’ll see what I can do.

Warning: you should know, before you scroll down, that having 8 VR images load at once may grind your browser to a halt. I likely need to find a better way to embed these images in the future.

This series of shots is again stereoscopic shots from a dry creek bed in the Wyalusing Hardwood Forest State Natural Area in Grant County, WI. I used my aforementioned process to get things going. Not much new to report there, except that Adobe bought Mettle, whose Skybox Suite is pretty amazing. As such, I got access to their VR suite. All I did was add a few transitions to the video between shots and rotate them to line up better, but I think that it makes things really come together nicely. Looking forward to exploring those tools more in the future.

The images aren’t perfect – far from it, indeed, but I’m still proud of them, being once told by person very knowledgeable about stereoscopic imagery that I’d “never get stereo out of that camera”.

Well, I did. I’ll keep using the Theta, but I’ll be shooting more images with the new camera.

so, here’s the images:

You can also see them stitched together with audio from that day here: