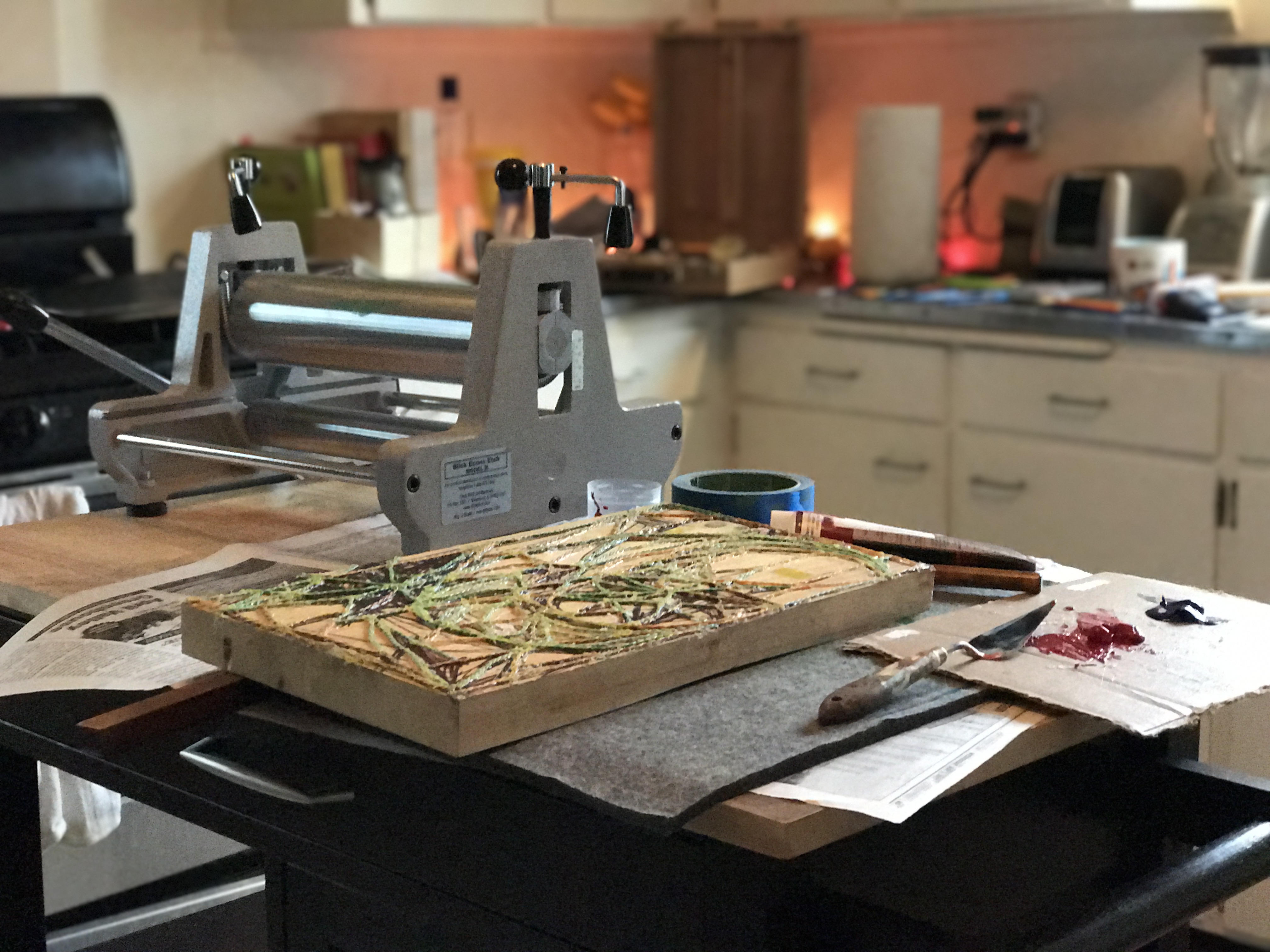 Last month, my mom’s second husband, Wonza, passed away. At the end, he was at home, as he had wanted, and made his peace with his god, as he had wanted. My mom, who did not have a great first marriage to the man that raised me, lost her “most favorite dude,” Wonza. Wonza was  born and raised in rural west Georgia near the Alabama state line. He was in the Army, he was a truck driver. He was a Mason, and a Deacon in his church. He was a good man, albeit sometimes a little hard to understand with his west Georgia dialect, but he was always quick to smile and I could see in his eyes within moments of meeting him, so many years ago, how much love was in his heart, both for my mom and for the world.

Mom’s 73 tomorrow and the strongest, most resourceful person I know. She’s basically Odysseus. Or coyote, or raven, or one of the fae; a flash of glamour in a mundane world. A self-taught artist, mom’s always been creating things. When I was a kid I was almost embarrassed by her unending creativity, as stupid kids can be of their parents before they get perspective, wanting a parent that would buy new things like everyone else, not someone that could repurpose plastic bags and yarn into rugs, or adorn everything with vines and curlicues of almost mandala-like intricacy.

I won’t gild the lily any further, but just leave it at “holy shit, my mom has unending creative energy.” Before I went for a walk on the PCT, I never saw it, only coming to it after walking around 1300 miles. So, when I returned, I was able to go and visit mom and Wonza for Thanksgiving, shortly before he got really ill. My brother and sister were there as well and it was a really nice visit. I shot some 360 pics with my Ricoh Theta and was able to share them with mom when I went down to help her through things for a couple of weeks. It’s all moved so fast since then.

I’ve been working a lot on making VR lately, really pushing the edge of what I can do with the gear that I have and in the next couple of days, I’ll be posting the fruits of my labor. It takes time to do each step and I want to do them right, with Quality.

As an aside, on Quality, I know that it’s no accident that the day after I left for Georgia, I instinctively bought “Zen and the Art of Motorcycle Maintenance” to re-listen to on the trip, having listened to it many years ago. I did so on impulse and I didn’t rationally know why, after all I was already cycling between “Emerson: Mind on Fire”, “The Hidden Life of Trees”, and “Guns, Germs and Steel” (having just finished “The Blind Watchmaker” a few days before). It’s helped me to gain a perspective on what I find good and meaningful in life.

So, I’ve been hiking and getting footage for VR, working on textural synth sounds, writing poetry, having live VR poetry events, and today, well, today I decided that I wanted to try out the printing press that we scored at an outlet store.

So today when I got up, I decided that I wanted to print something. The problem is, I know nothing of printing and didn’t know where to start. I had fiddled with the press previously with Brandie and we had made some interesting little prints with an old woodcut of hers and an etching. I had also tried an idea that I had about using strips of paper, but I’m not sure that they really turned out as well as I’d hoped. The prints that had come from the etching, however, were intriguing to me. They hadn’t “turned out” but there was something really interesting about interacting with the press and the paper and the plate and the ink…and just being there, so I vowed to return to the press and this morning, that’s just what I did.

So, today I woke up and decided that I’d print something. From what little experience I had, I knew I needed a plate, something with a raised surface that’d create an impression when pressed, and some paper. I manage to wound myself easily, so I decided to avoid carving and build up a surface. So, I went to the garage to my “overflowing bin of wood that could one day be useful but was not useful the day I threw it into this heap” and found a nice chunk of wood that used to be the seat of a dining room chair. I’d decided that I’d make it square and throw it in there when I tossed the chair out.

It looked like it would fit in the press, so I just kind of went with it. What would be more perfect to work with on that surface than CAT-5 network cable? Seriously, laugh all you want, but there’s four twisted pairs in each cable. That’s a lot of material and it’s pliable. I stripped the external sheathing, busted out the hot glue, and settled down to figure out what the heck to make, the eternal dilemma.

I decided not to worry too much about it, but did set myself to using my left hand for the work (I tend to be right-handed) and see what happened. So, I grabbed a marker and started making lines, turning the surface around and guiding what appeared until it felt “right” – until it felt like something I could work with. After all, I had no criteria and no expectations, so why not just let what comes, come? I followed the grain a little and marked knots a few times and had a curve of pretty big size kind of swooping through when I kind of intuited some shapes and tried not to get in their way while my hand did its work.

After that, I broke out the wire cutters and started placing the bits and pieces. I worked for several hours, just kind of feeling my way forward, listening and relistening to the last portions of “Zen and the Art of Motorcycle Maintenance” and letting the rain fall outside and the creative possibility of doing something novel guide me inside.

Eventually, I was ready to print, but I needed paper. I was partial to the idea of doing a watercolor of some kind on the large 18×24 pad of 90lb. paper we have, but for some reason, went with charcoal, one of my least favorite mediums of all time. I let my left hand explore and eventually forms and shapes started to materialize. I was on the verge of calling the thing that came out on the paper the work of art and starting over on it when I realized that I was falling into the “save everything, it may be art” trap. So, I continued filling it in until the paper was black. Yes, I meandered and rotated and drew forms and shapes on a piece of large paper until most of it was black with charcoal. Then, I brushed it (again with my tired and confused left hand; “jake, I thought I was just for playing guitar? wtf?”) prepared the surface with some vile acrylic spray, and finally ripped it to width and crosscut to length with a handy pice of straight wood. Super high tech.

All in all, much like in carpentry, when you’ve spent hours preparing a single piece of material, you tend to start to view that material with apprehension. You see it not as a piece of a larger whole, but an item that is now imbued with all of those hours you invested in it. It’s hard to keep yourself from worrying to much and let what will happen, well, happen.

We only have four colors of printing ink around… not sure what the difference is, but I figured that ink for prints is likely different than just regular acrylic paint. Maybe, maybe not, but I went on that assumption and realized that I’d have to use a light color to make this visible on black. Yellow. FML. Yellow. That’s all I had. Or bright green, like the prints above.

I didn’t stop and cogitate too long, I just decided to combine colors somehow and calm things down with the darker, more deep and less saturated red and blue that I had hoped to use when I was thinking of watercoloring the surface.

I did a few dry runs and realized that the catcher blanket and the plate that guides the print through the press wouldn’t make it with the thickness of my plate, the former kitchen chair. I also realized at this time that my chair had an indent in the middle of one side where your butt cheeks would go; a nice touch for a chair, but less than optimal for a printing plate. I used some newspaper and painter’s tape to build up the surface and practiced a few times with moving it through. With the differing heights, I’d need to adjust the press at every crank of the handle, but I figured that it’d still create a workable image.

Or not, and the time I had spent this morning will be a good less in “what not to do”.

At the end of the process, I had four prints, two on black paper and two on white paper, the two white prints having been sent through the press twice, one with just paint/ink, the other with a fine coat of india ink. I laid them out and started seeing the symmetries; seeing how they created mirrors of each other. With much awe and respect for the parts of my brain that didn’t have the language to say “dude, I’ve got some shit to make,” I couldn’t stop smiling…

After about three hours of cleaning up the mess that I’d made, I was able to get it all together and decided to share it with you. Hope you like it.

More to some soon.